Use of this site means you accept its terms and conditions.

From Wikipedia, the free encyclopedia
Clicking on blue underlined links in the article below will exit www.sharsmithpeak.org.

Carl W. Sharsmith (March 14, 1903 – October 14, 1994) was an American naturalist and Yosemite park ranger, notable for his knowledge and interpretation of the natural history of the Sierra Nevada. He taught botany at various universities, and discovered a species of flower in the Sierra. 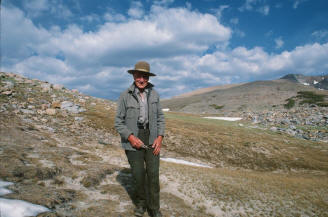 Born Karl Wilhelm Schaarschmidt II in New York City to Swiss and German parents. He grew up the U.S., Europe, and Canada. Sharsmith was inspired by the works of naturalist John Muir and became interested in the outdoors and nature. He dropped out of school at 14, but became inspired enough to finish his high school and college education.

Sharsmith would work each summer as a Ranger-Naturalist and spend the rest of the year teaching or performing herbarium research. He was said to have explored nearly every "nook and cranny" of Yosemite's High Sierra[1] He said that to motivate people to learn "people are not interested in facts. The greater appeal is to the heart." On his nature walks he would often kneel down and talk about a flower. One of his favorite flowers was Raggedy Aster Aster integrifolius.[2]

When asked what he would do if he only had a day to see Yosemite. "Madam," he replied, "I'd sit by the Merced River and cry."

The rest of the year he taught or researched at various schools: University of Minnesota, Stanford University, and San Jose State University. Sharsmith was Professor of Botany at San Jose State from 1950 to 1973.

Sharsmith's wife was Helen, a biologist by her own right. They had a son John, named after John Muir, and a daughter Linnea, named after Carolus Linnaeus. Sharsmith and his wife later divorced.

Sharsmith died 1994 in his home at San Jose, California.

The standard author abbreviation Sharsm. is used to indicate this individual as the author when citing a botanical name.[3]